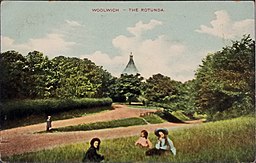 Historic England have just released a report on the Woolwich Rotunda, it covers the history of this fascinating structure and options for it’s future. Well worth taking the time to read. Click the link below to download the PDF.

The Woolwich Rotunda is a structure of international significance, listed grade II*. Designed by the architect John Nash, it began life as a temporary building constructed in 1814 for the Prince Regent (the future George IV) in the gardens of Carlton House, and utilised as a ballroom for the Wellington Fête of that year. In 1818, the structure was dismantled and transferred to Woolwich, for the use of the Royal Military Repository. The Rotunda was rebuilt and reopened on its new site as a museum in mid-1820, intended for use both by military men and civilians. Its interior was formed of a single large space filled with military collections, while the Rotunda was carefully sited at Woolwich, forming part of the Royal Military Repository training ground. The building remained a museum until the turn of the twenty-first century: the bulk of the Rotunda’s collections were transferred to Firepower, the new Royal Artillery Museum, opened in Woolwich in 2001. Following the closure of Firepower in 2016, the collections have been moved to a new museum in Wiltshire, due to open in 2022. Emptied of its exhibits, the Rotunda is currently without a function, and has been on the Historic England buildings at risk register since 2007. This report aims to inform discussions about its future.

New Video Release: Was the battle of Waterloo really fought on the playing Fields of Eton? – by Mick Crumplin

New Video Released: The Prince of Orange: Hero or Zero? – by Andrew Field