The Grand old Duke of York

The Waterloo Association > Features > The Grand old Duke of York 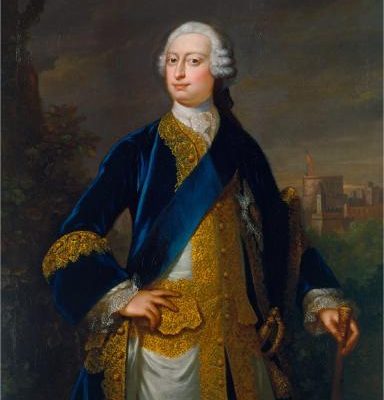 Oh, the grand old Duke of York
He had ten thousand men;
He marched them up to the top of the hill,
And he marched them down again.

In the popular consciousness Prince Frederick Duke of York and Albany (1763-1827)is little remembered other than by this rhyme. Yet he was one of the most significant figures of his day, commanding armies in the field, commander in chief of the British Army in some of its most critical years and second, then first in line to the throne.

There are many competing theories as to the origin of this rhyme. There is no known author and there is no recorded evidence of it until well after his death. It appears to have been based off a much earlier rhyme about the King of France. An early version is recorded in 1892 and the definitive version first appeared in 1894. It is worth noting that the Duke was regularly lampooned in pamphlets and cartoons throughout his life, none of these however mention hill’s and the ten thousand which almost certainly means that the jingle became known after his death.

The King of France

This jingle apparently caught on in 17th century England. Versions like this involving the King of France continued into the 19th century and certainly by 1892 the King of France was being swapped for the Duke of York, the version we know now with the Grand Old Duke would be recorded two years later.
So what could the origin of this famous jingle be?

Richard, Duke of York was defeated at the Battle of Wakefield 1460 when he sallied from Sandal Castle with some eight thousand men many of whom were killed by a superior force. This candidate is rather weak. This Duke of York was hardly well known in the late Victorian era not hardly fitting the epitaph “Grand” or indeed old being killed in battle at 49. Also there was no marching up and down a hill but rather a descent from a castle followed by a rather bloody battle and the execution of the Duke of York.

James II formerly known as the Duke of York, led an army to Salisbury plains to face the invading Prince of Orange, only for that army to fall apart as his support collapsed and James fled England. This is hardly credible either. James II was not better known as the Duke of York and the Victorian’s would hardly have consider him Grand. The brief campaign is not known for its repeated hill climbing.

Overall the only real candidate seems to be Frederick, in his title, relative temporal closeness to the rhyme and in particular his close association with the army for most of his life.

Frederick returning from Germany in 1797 found himself in need of a country estate so purchased at Allerton in Yorkshire. The Duke undertook significant works on both house and garden. Local tradition holds that the 200 foot hill on which the temple of victory stand is the source of the ryhme. Given the existence of the hill and temple prior to Frederick purchasing the estate this however appears to be nothing more than a nice local yarn.

In Flanders allied armies under Francis II of Austria were gathered to advance on Paris and so crush the revolution. Eleven thousand men under York were part of this force of five columns. York was ordered in spite of protests to advance to Turcoing, a rather exposed position. Riding to consult with a supporting Austrian force Frederick only found Frenchmen, he successful escaped although losing a horse in the process. The British force then conducted an excellent withdrawal from very difficult position. As result of this the British army go up the heights at Roubaix(which might generously be described as a minor hill) and down them and then back to them.
On the face of it this seems to fit the facts. Yet Turcoing is a minor footnote in military history and almost certainly not in the public’s consciousness decades later.

The Battle of Bergen

In the Helder Campaign, 1799, an allied force under York landed in Holland in order to capture the remaining Dutch fleet now commanded by the newly formed Batavian Republic and then support a supposed rebellion against said Republic. The fleet of eight ships of the line was successfully captured ,the army’s advance was less sucessful. The Anglo-Russian force advanced in three column to attack the French-Batavian forces. The Russian column after initial success was roundly defeated , the left flank of British troops routed the Batavian’s but the column under Abercromby failed to support due to tiredness and excess caution. York then ordered a retreat in spite of the success of the left column and having numerical superiority. Little more was achieved in this campaign and the Duke was heavily criticised at the time, this perhaps might be our source. There is however conspicuous lack of hills in this area of Holland, but art is not always known for its fidelity. The battle of Bergen was however far from famous and not a military defeat so it would be a great stretch to see it as the source.

While the Duke of York did lead armies in the field in his younger days, it was as commander in chief of the army that he made his greatest impact and for which he was most well known. Derek Winterbottom in his book on the Duke of York reports there is an oral tradition in Woodbridge, Suffolk that troops marched up and down the hill as part of their training. Given the Duke of York was a frequent visitor to garrisons around the kingdom in his 30 years as commander in chief perhaps this is the source of the jingle. We might suppose that this repeated training over many years made more impression on local story tellers than obscure events in Holland.

Today the jingle is seen more as a criticism of military folly, but it is worth considering it as a tribute. The “Grand Old Duke” could easily be seen as affectionate. The marching up and down representative of his commitment to training the army. Given that he was known commonly as the “Soldiers Friend” for his improvement in pay and conditions, this seems like a plausible re-interpretation.

As with most folk songs or stories the author or intent can never be known. It could be as simple as the Duke of York working for rhyming reasons rather than any judgement on the man. On the positive side a man who did a great deal for the British army and gave Wellington a battle winning instrument is at least remembered. Perhaps this will encourage some to learn more about this important figure and period in Britain’s history.