The Memorial at Quatre Bras to the British and Hanoverian Forces 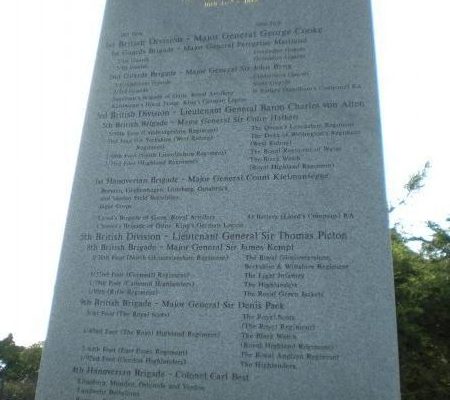 The Waterloo Association’s key objectives are to safeguard and preserve the Waterloo battle sites and to promote the public education and appreciation of the history of the Napoleonic Wars. One way we do this is with memorials, often restoring them but sometimes erecting new ones.

Until 2002 there were no memorials at either Quatre Bras or Waterloo to the British Army. Even though there were monuments to the Belgian, Dutch , German and French armies.

In 1998 the Duke of Wellington decided to set this right and started a joint Anglo-Belgian project to erect a memorial at Quatre Bras. Quatre Bras was a closely fought engagement that while outshone by Waterloo was nonetheless critical to the defeat of Napoleon in 1815.

The memorial is a ten foot granite obelisk, carved and inscribed by Galloway Granite in Scotland. The architect was Comte Eric d’Oultremont. On the monument are listed the 17 British and 13 Hanoverian units that fought at the Battle of Quatre Bras. The titles listed on the monument are those that existed in 1815 and also in 2000 after many years of amalgamations and disbandment’s.

The original plan was for the monument to be transported from Scotland to Belgium and erected by British Territorial Army units as part of their training. In July 2000 it was moved to a Belgian Army barrack by 151 (Greater London) Logistic Support Regiment TA.

The monument was then due to be erected by 23 Pioneer Regiment, Royal Logistic Corps and 518 Specialist Team, Royal Egineneers Military Work Force. In Febuary 2001 however, Foot and Mouth disease broke out in the UK. As the site for the memorial is on a working livestock farm no troops could be sent.

The Belgian Army came nobly to the rescue. 4E Bataillon du Genie moved the monument to site, did much of the preparatory work and placed it in its final position.

The project received support from many organisations and individuals. The railings were formerly at the Guard’s Depot, Caterham, were donated by the present owners of the site (2001), Linden Homes. Financial contributions have been received from all the Quatre Bras Successor Regiments, the Waterloo Association and many private donors.

As the memorial is on Belgian soil it has been placed in the care of the Belgian Waterloo Committee.