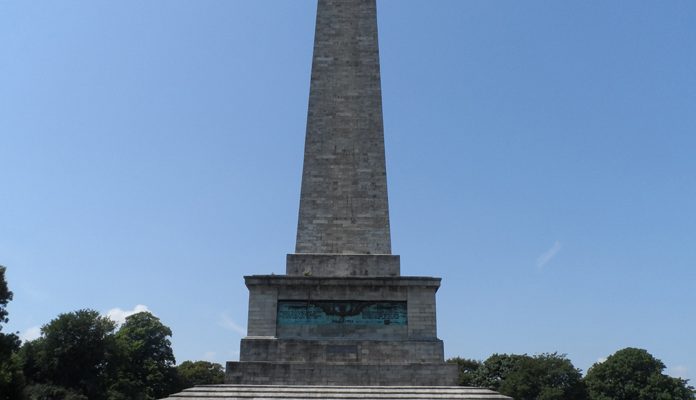 In August we undertook our most ambitious trip yet, a 5 day + trip to look at Ireland in the 18th century concentrating on Wellington sites (he was born in Dublin on 1st May 1769) and sites connected with the 1798 rebellion (many people he knew served in the government forces seeking to crush the rebellion eg Cornwallis, Crawford, Moore, Pack, Ponsonby, Stewart). Thanks to the organisers and presenters John Morewood, Patrick Mercer and Roger Ansell. Clare Harding shares with us her thoughts on the trip

“A party of sixteen assembled in Dublin on the evening of 12 August for a tour focused mainly on events in 1798 – the ‘Year of Liberty’ – but also taking in some from 1916-22 that we passed along the way.
Indeed, day one started with the taking and surrender at Easter 1916 of the GPO, just along the road from our hotel, after which we crossed the Liffey for a memorable tour of what in 1798 was the Irish Parliament building. Rendered surplus to requirements by the Act of Union, it was acquired soon after by the Bank of Ireland, which still owns it. Our guide was erudite, articulate, witty, and no-one – not even John Morewood – minded as he entertained us for almost double the time allowed for the visit.

From there we went on to the Merrion Hotel, the front range of which combines four original Georgian houses, including the Dublin home of the Wesley family when young Arthur was a boy and where he was born. After a tour of the building we were treated to the house lemonade before going on to Bewleys for an excellent lunch. A brisk walk took us on to the Castle for a pre-booked tour of the main rooms, or, at least, those not closed off for re-decoration ahead of the Papal visit. The state rooms have obviously changed since a certain ADC to the Lord Lieutenant walked its corridors, but none of us regretted another recent addition, that of a cafe.

There was also time, on what had turned into a grey, gusty afternoon, for an account of the attack on the Castle area in 1916, after which we walked down to re-cross the river – with a nod to the stretch of quay where AW lodged during his service at the Castle – and find our ways to the sites of the Newgate prison and the King Street North atrocities. A slight detour on the way back to the hotel took us to Henrietta Street, the first Georgian street in the city, which is in a sad state, with some buildings empty, others occupied but dilapidated, and only a few restored or in restoration.

On day two we took to the minibuses, starting with a brisk tour of Papal visit security fencing in order to access the 1819 Wellington monument in Phoenix Park, followed by the short drive to the military museum at what is now the Collins Barracks. The oldest parts of this complex were built in 1703-10, although it was subsequently extended. The displays include a small but fascinating gallery – with some outstanding exhibits – on the events of 1798, as well as others on Irish engagements for and against the Crown from 1500 to 1918. Some of the group also visited the cemetery above the barracks, where the men executed after the Easter Rising were buried.

Then it was on to Castletown for a tour of the first Palladian mansion in Ireland before taking the long road south to Wexford. This part of Ireland witnessed some of the most vicious events of the 1798 risings, including summary executions by both sides in Wexford town itself, so it was a surprise to see a statue of a pikeman as we walked through it to dinner on the first night, given the numbers of civilians who were piked to death on the old town bridge.

The recommended pre-reading for the tour had been Thomas Pakenham’s “The Year of Liberty”, a rivetting account of the background to 1798, the conspiracy behind the rising and its outcome. The conspirators were inspired by the French Revolution and initially expected to be supported by landings of men and arms from France itself. Its leaders appointed volunteers to head regional Directories and local Committees to mobilise an Irish Revolution, but its chances of success were probably fatally compromised from the outset by the inexperience of most of the conspirators. Nevertheless, they proceeded to plan co-ordinated risings in Dublin and at centres in each of the four provinces, unaware that there were already informers among them passing information to ‘the Castle’, as the Crown representatives in Dublin were known.

The Castle’s ability to respond was constrained by tensions between themselves and the Irish Parliament, membership of which was limited to conforming protestants. (Under the Penal Laws, Roman Catholics could, among other prohibitions, neither vote in parliamentary elections nor stand for office. Also, as in the rest of Britain, only property owners could vote at all, and there were the usual collection of ‘rotten boroughs’ in the gift of local aristocrats.) The situation was complicated by the facts that the ‘military’ presence in Ireland was principally militia and volunteer regiments resourced by the gentry and aristocracy, with very few regular Crown troops, and that in many areas these troops were dispersed around local barracks, which made them both vulnerable to attack and difficult to concentrate in response to specific threats. As information about the planned insurrection came forward, the Castle applied to London for additional troops and arms, but none were forthcoming until after most of the local risings had been suppressed.

The rising in Dublin was largely forestalled by the arrest of United Irish leaders in February and March 1798, although those left at liberty then regrouped to press ahead, even without immediate French support. Tragically, one response to the discovery of the conspiracy was the imposition of martial law in late March, and the brutal manner in which that was imposed across the country, mainly by ascendancy forces against the Catholic population, with no regard for any evidence of anti-crown sympathies, let alone activities, was undoubtedly the match that lit the powder keg in May, June and July. By the time the French finally arrived, landing in Mayo on 22 August, and despite the initial success at Castlebar and the brief Longford and Westmeath risings, the Crown was fully in control, and the end was inevitable.

Our tour took in some of the main locations of the Wexford rising: Oulart Hill, Enniscorthy (where there is an excellent and surprisingly balanced interpretation centre), New Ross, Goffs Bridge and Vinegar Hill. We then moved north via Old Kilcullen and Prosperous, locations in the Midlands rising, to Ballinamuck, where on 8 September 1798, General Humbert’s small French force of perhaps 850 men and only about 1,000 remaining of the much larger number of Irish who had initially joined them on their march through the west, were caught between Lake’s pursuit (led by Bob Crawford) and Cornwallis’s troops, already blocking their road to Dublin. The outcome was inevitable, but while Humbert and his men were treated according to the conventions of war, many of the Irish who were captured, rather than slaughtered on the field or in retreat, received more summary ‘justice’.

On the morning after the battle, Cornwallis and his staff moved on to Castlepollard, the seat of Lord Longford, who had been active in defeating the Midlands rising. John Moore joined them there, having not been present at Ballinamuck. News had just come through that a further French fleet, this time with the United Irish leader, Wolfe Tone, on board, had left Brest for Ireland, and the army was redeployed to be prepared for any eventuality. But that fleet was intercepted at sea on 12 October and Tone (technically a French officer) was taken prisoner to Dublin. He subsequently fatally injured himself before he could be executed.
One visit I have so far omitted from this account was to Tullynally, formerly Pakenham Hall, where we had the pleasure of meeting Thomas Pakenham himself, before being shown around that the family seat by his daughter, Eliza. The portrait of Edward Pakenham, of Salamanca and New Orleans fame, over the fire in the library was only one of the many interesting objects she showed us. We all very much appreciated the opportunity to visit their family home.

On our final day after visiting the battlefield site of Ballinamuck in the pouring rain we visited the ruined Dangan castle- Wellington’s childhood home. It stands forlorn in the middle of an agricultural landscape which once had one of Ireland’s greatest formal gardens. It’s been a ruin since the early 19th century having been sold by the Wellesley family and then let to a member of the O’Connor family who seems to have accidentally started a fire in his eagerness to make bullets to rob a mail coach! From Dangan to Trim to see the Wellington column and then finally to the Hill of Tara where the ancestor of one of our group, Kelso Yuill, fought the rebels in 1798.
Having read ‘The Year of Liberty’ and visited so many sites associated with the 1798 rebellion, my overwhelming response has been sheer horror at its ample evidence of ‘man’s inhumanity to man’. It is hard to believe that such events could have taken place in the apparently enlightened British Isles not much more than 200 years ago. But hand in hand with that has been near disbelief that sheer bigotry has allowed the atrocities committed then on both sides to be the excuse to fuel continuing civil strife, even into our own lifetimes.

The Enniscorthy centre concludes with a room which challenges visitors to consider ‘who writes history?’ It quotes from different accounts, then sketches the background of the author, showing how each could have been biased in their viewpoint. I returned from Ireland wondering how many of the victims of the 1798 who have been appropriated as heroes by subsequent generations of ‘patriots’ would actually have supported their actions, especially when one considers that the contemporary inquiry into the core conspiracy found that not one of its members was a Roman Catholic, and that senior statesmen agreed that its aim was to achieve a Jacobin revolution by, as Cornwallis put it, “… men who had no thought of religion except to destroy it.”

Add to that the fact that under martial law there was a brisk trade in pikes in targeted areas because people who, being loyal to the crown, had never owned one and so had none to surrender, knew that, because they were known to be Catholic, only by having one to hand one in would they stand any chance of avoiding being treated as rebels and seeing their homes burnt, their goods destroyed and their families slaughtered.

The 2019 trip will be the field of the Waterloo Campaign click link for more details.