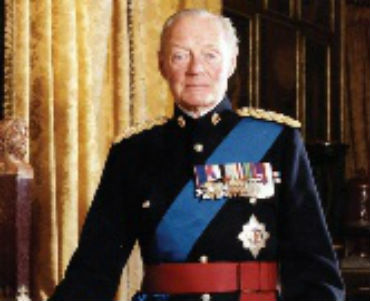 Valerian, the 8th Duke of Wellington died on the eve of the bicentennial year of the Battle of Waterloo. It was a cruel twist that for the lack of a day his tomb stone might have read 1915-2015. The Duke was determined to be with us all for the bicentenary and at St Paul’s in particular so I expect he was asking St Peter some tough questions when he reached the pearly gates.

For us in the Association this will come as a great sadness as he has been something of an icon to all those who have an interest in the battle and its site. The late Duke was a distinguished soldier during and after the Second World War being awarded an MC for his gallantry in an action, ironically against the Vichy French in Syria in 1941. Later he was promoted to Brigadier and his last appointment in the Army was being the Defence Attache in Madrid. It was probably unique that a foreign attache would also become a Grandee of Spain. He held several foreign titles but perhaps the one he valued the most was ‘Prince of Waterloo’. He always made a point when corresponding to Belgians of writing this title below his name.

In 1973 the battlefield of Waterloo was threatened by the construction of a motorway across its centre. This caused a flurry of activity in the press both here in Great Britain and in Belgium. The 8th Duke took the lead by gathering a team of eminent people later called the Waterloo Committee in order to fight this development of what was a beautifully preserved battlefield untouched since 1826 when the Lion Mound was built much to the dismay of the First Duke. The original trustees were; the Duke of Wellington, the Marquess of Anglesey, the Countess of Longford, Field Marshal Sir Gerald Templer, the historian David Howarth and Frances Loudon Carver, a formidable team. The aims of the trust were twofold – to promote education and appreciation of the period 1793 to 1815 and to promote that interest by preserving the battlefield. In the early days this work was funded by The Library of Imperial History whose Chair, Donald Crawford, was a supporter of the Duke’s work. They set to work straightaway and immediately established a Belgian sister team whose members included the Baron Snoy et d’Oppeurs, Count Emmanuel de Meeus, Count Henri Pirenne, Professor Henri Bernard and Jean Bloch. An Act of the Belgian Parliament given in March 1914 set out various conditions in regard to the battlefield and these were invoked in order to prevent the motorway following the desired course. Eventually the Belgian Government relented and the motorway was diverted via a cutting to the West of Hougoumont. Now as the trees and have grown the road is hardly perceptible except for a low hum of traffic going to and from Charleroi. His contribution to the preservation of the battlefield cannot be overstated and we should all be grateful for his leadership and inspiration in overseeing the developments there.

In 2002 he spearheaded the appeal to erect a Memorial to the British Army at Quatre Bras. Julian Paget, Tom Hall and Clive Hamilton were part of his team who succeeded in this venture. Right up until a year or so ago he attended the AGMs of the Society of Friends of the Waterloo Committee or the more simply titled Association always taking an interest in our affairs. His commentaries over the news of the day normally delivered with considerable wit creating gales of laughter. He had a lovely touch with members who reciprocated with great affection and who will now sorely miss him. We can perhaps visualise the joy at which he will seek out his illustrious ancestor and imagine the fun they would have in exchanging experiences.