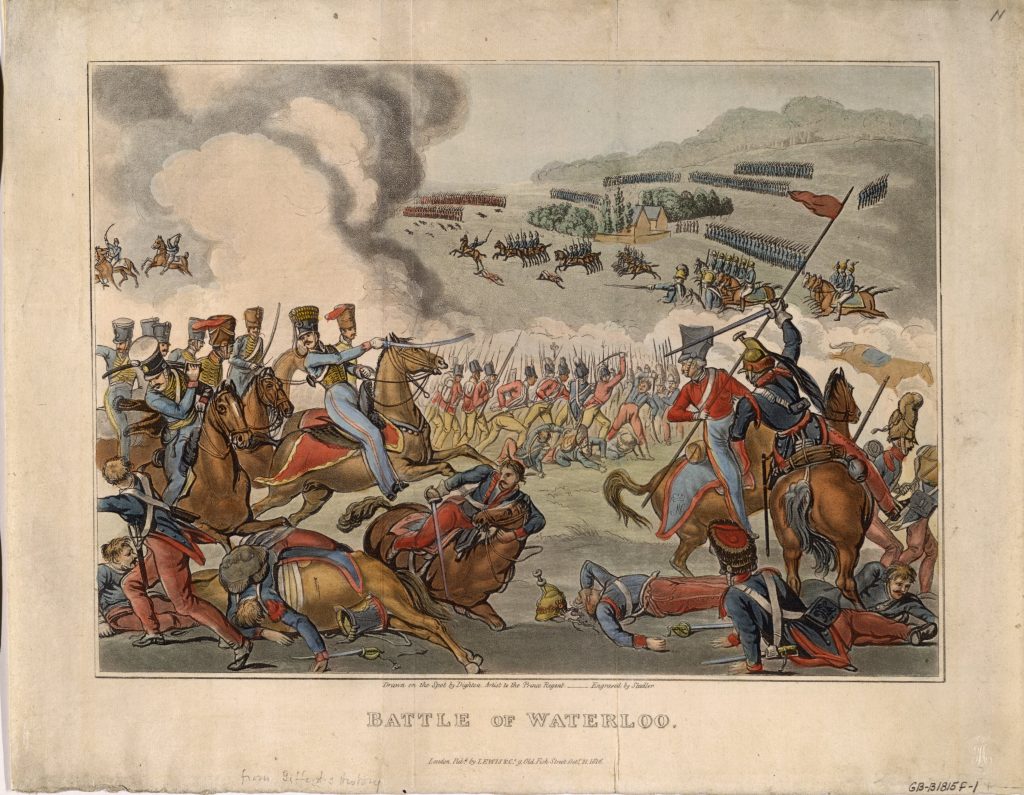 Waterloo was more than simply on battle, it was a campaign – famously referred to as ‘The Hundred Days’

It was a period of high drama, with Napoleon returning from exile on the Island of Elba and marching on Paris with only one thousand men, but gaining support as he marched and ousting the king in a bloodless coup.

However, the other main powers in Europe, Russia, Prussia, Austria and Britain, had spilt so much blood and wasted so much gold to rid Europe of Napoleon and they were not prepared to sit idly by and simply allow Napoleon to continue in power. Europe declared war – Not on France but on one man – Napoleon!

Napoleon had two options; he could wait for these huge allied forces to enter France, weakening their forces along the way, as they covered each of the French fortresses and protected their lines of communication and fight a decisive battle near Paris; or he could launch a surprise attack on the two armies already placed near the French border and destroy them before the other nations could bring their forces to the front. Napoleon as ever went for the dramatic and launched an attack on Belgium

Crossing the border in the early hours of 15 June 1815, Napoleon surprised Wellington (commanding an allied force including British/Netherlands and German troops) and Blucher (commanding the Prussia troops) and succeeded in bringing the Prussians to battle at Ligny on 16 June, whilst Wellington’s forces were held back at Quatre Bras the same day.

The Prussians defeated and in retreat and the Duke of Wellington’s army retiring on the 17 June towards Brussels, Napoleon sent troops under Marshal Grouchy to pursue the Prussians back to Germany, whilst he turned his whole force on Wellington.

Napoleon pursued Wellington’s retreating in torrential rain to a position just in front of Mont St Jean, where Wellington halted and offered battle. Delighted with the opportunity to destroy Wellington, Napoleon waited for the next day, 18 June to launch his attack on Wellington.

Unbeknown to Napoleon, Wellington had offered battle only on the promise of  Prussians support, they had managed to give the French the slip after the defeat of Ligny and retired on Wavre which was close to Wellington’s left. Napoleon launched a number of major attacks against Wellington, which he ably countered, but as the day progressed the threat of a French victory grew ever stronger.

But at the eleventh hour Blucher’s Prussians arrived on Napoleon’s flank and together the allied armies overcame French resistance and the French army was defeated and disintegrated, unable to form up again in serious opposition to the allies.

The two armies marched on Paris with only minor opposition, Napoleon abdicated and attempted to escape to America by ship. Thwarted, he surrendered to the Royal Navy and he was exiled to St Helena, where he died six years later of stomach cancer.

It is a gripping story, it ended the career of probably the greatest general ever, Napoleon Bonaparte and saw Europe enjoy a period of relative peace.

If you want to know more about this fascinating period of history read on…..