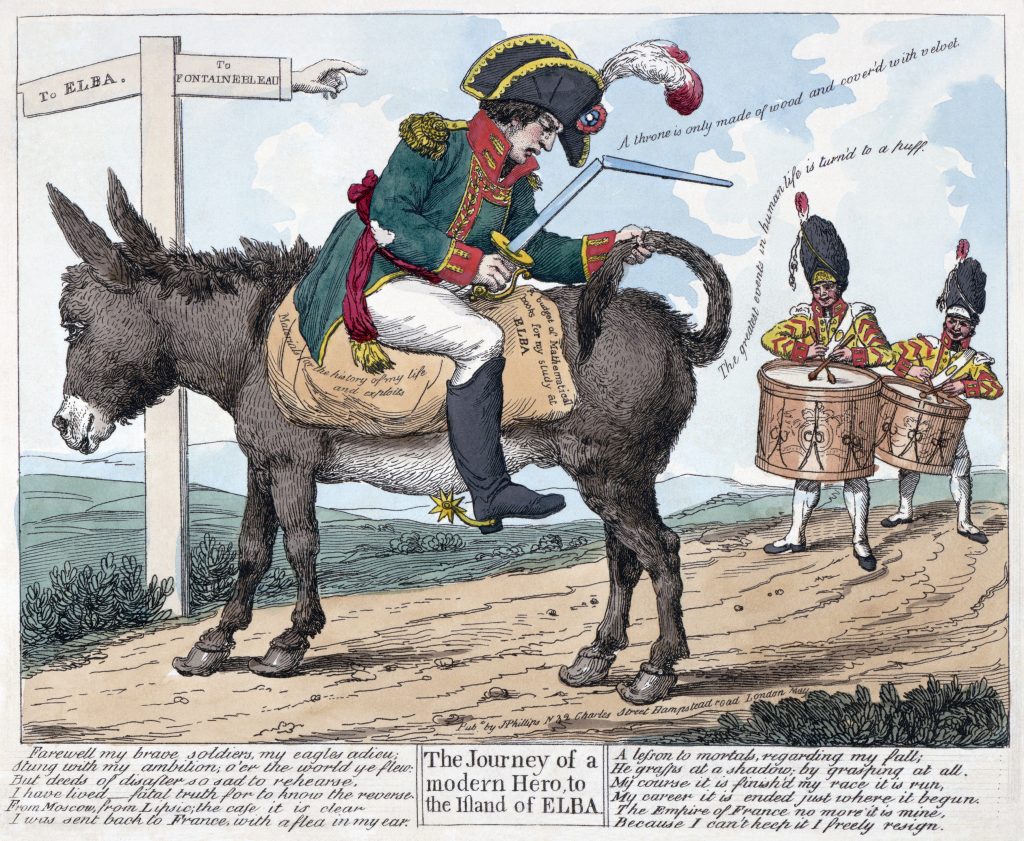 Banished to his new kingdom of Elba in 1814, Napoleon initially feigned pleasure and great vitality in improving his new kingdom, with new industries and roads developed. However, Napoleon remained fully aware of events within France and received numerous visits from those still loyal to his cause as well as his family. Acutely aware that the Bourbon’s had rapidly expunged the good will of the French nation and unable to maintain his kingdom without the promised pension from Louis XVIII of 2 million francs per year, which failed to materialise, Napoleon simply bided his time and chose the perfect moment to reappear on the international stage.

With the departure of his British observer, Colonel Sir Neil Campbell, to Florence for his health, Napoleon hastily completed his preparations to leave Elba.  His tiny fleet consisting of the brig Inconstant, four small transports Etoile, Saint Esprit, Caroline and Saint Joseph and two feluccas, sailed on 26 February 1815 just as Captain Adye of HMS Partridge, the patrol ship, sailed to Livorno to collect Campbell who was returning. The little convoy sailed slowly in very light winds and Napoleon’s traditional luck at sea continued as they avoided the suspicion of three French royalist ships patrolling these seas as they passed, the Melpomene, Fleur de Lys and the Zephir. There is however, some reason to suspect that more than one of these ships, which could easily have thwarted Napoleon’s enterprise, deliberately turned a blind eye to proceedings.

On a sunny Tuesday afternoon, the ships sailed past Antibes into Golfe Juan and anchored, before landing some of the soldiers were sent to secure the beach and a nearby abandoned fort which dominated it. 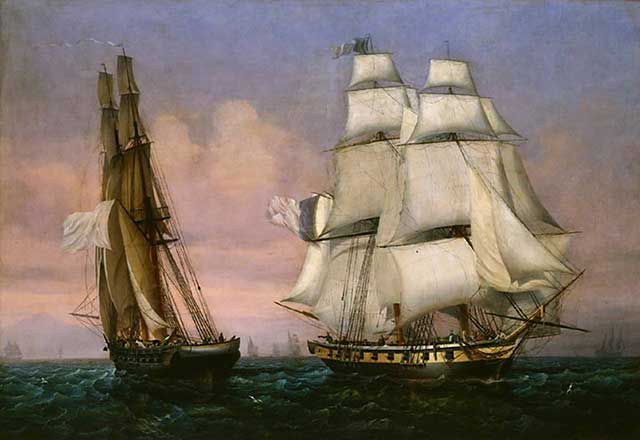 In that moment at Golfe Juan, the arrival of Napoleon on the beach at 4 p.m. appeared no more than the last pathetic gamble of a fallen tyrant with no one rushing to join his little band; a party of men sent to sound out the garrison at Antibes had all been arrested.

Napoleon, ever a man for omens, looked to arrive in Paris by 20 March, his son’s birthday; this meant a march of no less than six hundred miles in nineteen days, which required a punishing schedule.

His army of six hundred guardsmen, forty Polish Lancers and a couple of cannon then struck into the hills the next day. The roads climbed higher away from the coast, forcing them to abandon the cannon as the men were forced to travel in single file along snow clad footpaths to safely reach Grasse. Napoleon needed to move at a rate that prevented the news of his march arriving in time to allow organised armed resistance. In fact the reaction by the general populace to his arrival at Grasse was muted; they appeared stunned but also apprehensive of the consequences. The authorities in each town were surprised and unprepared, afraid of the reaction of disaffected troops and nervous to openly support either side in this challenge for the crown, unsure of who would prove victorious.

Napoleon continued to press on across the heights to Castellane, Digne, Sisteron and Gap where they finally received their first enthusiastic welcome. 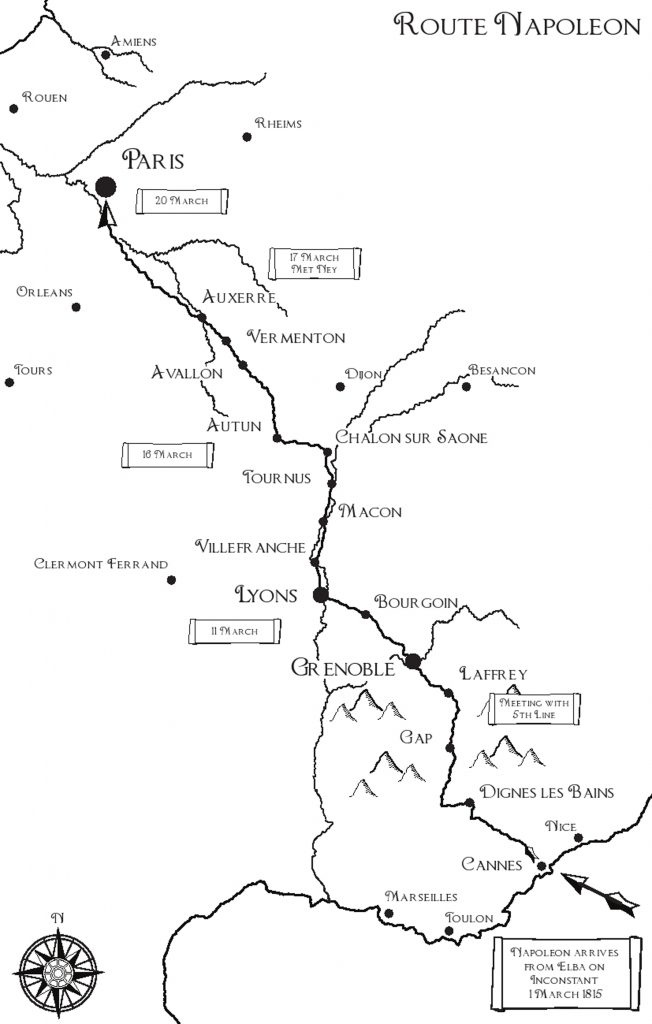 On the road to Grenoble, Napoleon faced the first great moment of his march, at the village of Laffrey. Colonel Lessard had been sent with one battalion of 5th Regiment to bar Napoleon’s advance. Deployed in line to block the road, Napoleon advanced alone to face the opposing soldiers and exhorted the troops to follow their Emperor. To a man they defected and swelled his ranks. The legend of Napoleon makes much of this moment, but apparently the 5th Regiment were never actually ordered to load and Napoleon was already confident of their support. His little army continued to Grenoble, whose gates were opened to them, a huge crowd thronged around him and cheered Napoleon whilst the entire 7th Regiment, led by Colonel Labedoyere, defected to Napoleon. Later, Napoleon stated that ‘Before Grenoble I was an adventurer, at Grenoble I became a reigning prince again’.

Napoleon had marched one third of the way to Paris in the first six days and his force now consisted of 8,000 men, 20 cannon and a full regiment of Hussars, from here his march looked more like a royal procession with only a few troops attending him, whilst most now travelled by boat along the rivers.

The King of France had heard of Napoleon’s return by 5 March and initially sought to calm the subsequent panic at Paris, by playing down Napoleon’s chances. Soon he had despatched the Comte d’Artois, the Duc d’Orleans and Marshal Macdonald to organise the forces at Lyon, France’s second city, where it was expected that Napoleon’s adventure would end. Such a senior trio were expected to stop the rot, but all three were soon disabused of all hope on their arrival at Lyons, when it became clear that the forces there would not support them nor stand against Napoleon and they all soon hastily returned to the capital.

An abortive attempt was made in the north of France by General d’Erlon to support Napoleon’s return by encouraging the garrison of Lille to rise up and march on Paris whilst the Lallemand brothers, General Lefebvre-Desnouettes and Colonel Marin sought to incite other units to revolt. d’Erlon and the Lallemand brothers were arrested, whilst Lefebvre was forced into hiding and Marin fled south to join Napoleon, ending this abortive coup. Marshal Soult, as War Minister, was blamed for the failures of the royalist troops, with claims being made that he had sent forward the least trustworthy troops and he was removed from his post on 11 March.

Napoleon was at Autun by 15 March and finding that the troops were now returning to him in droves, his army numbered over 14,000 men. Marshal Ney was dispatched by Louis to stop him; with Ney famously promising to bring him back in an iron cage. However Ney was fully aware of the disaffection of his troops and feared France collapsing into civil war. He had received regular messages from Napoleon calling for him to join him and he eventually took his troops over to Napoleon.

At Paris some wag put up a placard which summed up the situation perfectly,

From Napoleon to Louis XVIII, My good brother, there is no need to send me any more troops. I have enough.

As if planned to the day, Napoleon arrived at the Tuilleries at 5 a.m. on Monday 20 March to find a huge cheering crowd, waiting to greet him; and he was carried shoulder high into the Tuilleries. The Army was delighted to see his return, but the population of Paris remained largely ambivalent. The King had left Paris early the previous morning on his way to Lille and the border with the Netherlands. Many of his government and the nobility of France also fled and it is estimated that 20 million francs were removed from the Paris banks before Napoleon arrived.Louis XVIII however reached the border in safety.

Captain George Barlow of the British 69th Foot happened to be with his regiment when the King crossed at Menin:

Menin stands precisely on the boundary line dividing Flanders from France & is situated upon the little River Lys, here about thirty yards in breadth & over which is thrown a small bridge; the frontiers following the course of its stream. I had just returned express from Courtrai, having been sent thither with the Moniteur of the 21st containing the news of Bonaparte’s first entry into Paris & his proclamations. Having been thoroughly drenched to the skin by the way & almost in the act of changing, a rare hubbub on a sudden ran through the town and a French general came galloping in; he announced that Louis the Eighteenth was close at hand escorted by a party of Cuirassiers. We had scarcely time to stand to our arms when the cavalcade appeared & stopped at the bridge. Upon arriving the king desired his escort would return into Lisle, which they I am told were very unwilling to do; but his majesty insisted & their parting was very affecting; many of the soldiers rode up to the window & kissed his hand, whilst several in the most determined manner declared they would accompany him; whether he would allow them or not & a few are therefore permitted to enter.

The 69th were drawn up in the main street and received the cavalcade with all due honours. It was composed of but four carriages, that of the King leading, drawn by six very indifferent post horses, the traces being of rope. Upon arriving at the colours, close to where I stood, it stopped and he let down the window. The commanding officer desired me to step up to the carriage and enquire what were His Majesty’s wishes and which I accordingly did.

The safe departure of Louis was secretly welcomed by Napoleon, who was relieved not to have the embarrassing problem of what to do with him if captured.

He wrote to his wife, Marie-Louise, requesting her and his son to return from Vienna, but she had now taken up with Count Neipperg and renounced her marriage to Napoleon.

Napoleon was acutely aware that the great European powers would react badly to his return and he promised peaceful intentions and sought to be allowed to reign as King of France without outside interference. It was a vain attempt and Napoleon knew that if he was to retain his throne he would have to fight for it.

The announcements in the French national newspaper Le Moniteur sum up the recent situation perfectly: