D’Erlon’s Attack on the Left 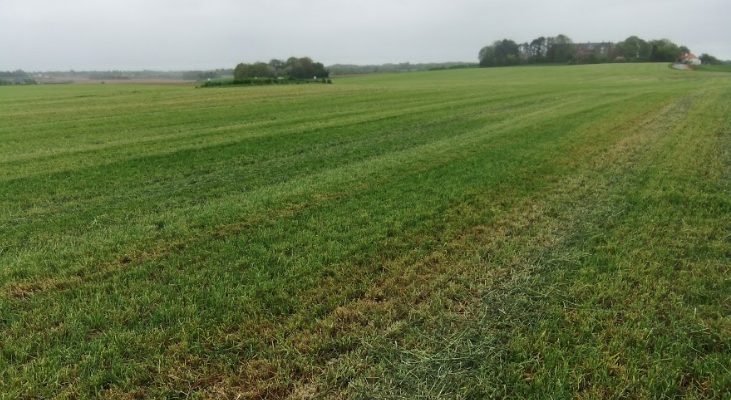 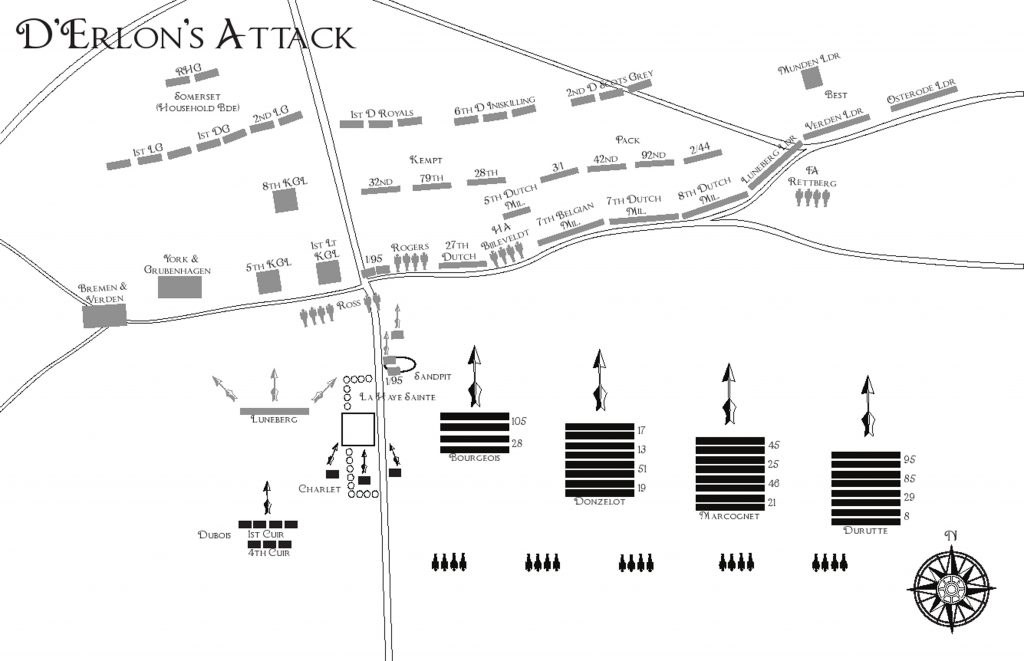 This was intended to be the French main attack and certainly given the approach of the Prussians to the battlefield was the only one with any potential of lasting success. Napoleon’s master plan was for D’Erlon’s corps to march up the ridge, break through Picton’s division and then turning left role up the British line forcing Wellington’s remaining divisions to disengage westwards and fall back on the Channel Ports. Napoleon would then be able to enter Brussels and hopefully persuade the Coalition to sue for peace. D’Erlon’corps numbered approximately 17,000 men. They had had minimal involvement in the campaign so far and were highly motivated. They had other advantages:

1) At least two of divisions were in a new formation that was being used for the first time at Waterloo. Normally the Allied troops would enjoy the superiority in firepower that a long line of infantry gave against a narrow French column frontage. D’Erlon and his generals had decided cided however that for both Donzelot’s and Marcognet’s divisions that were going to break the allied line they would need to have a much longer frontage. So on 18th June these divisions were arranged in a formation calinled “colonne de division par bataillon” with a frontage of 140 men. This was different from a normal French formation of “colonne de bataillon par division” with a frontage of 70 men and meant that Donzelot and Marcognet could bring twice the fire power to bear than normal.

2) Ney and D’Erlon had ensured that their infantry was protected from attack. Accompanying the troops were horse artillery that could be used against any compact infantry formations. Also, cavalry accompanied the corps. On the left were two regiments of Cuirassiers numbering 780 men. On the right were Chasseurs, the equivalent of light dragoons, and lancers totalling 1,100 men. The cavalry units would deter other allied infantry from coming to the help of the attacked Allied troops as well as protecting D’Erlon’s corps from a flanking attack by Allied cavalry. No protection was of course made against a frontal cavalry attack.

3) At least two of D’Erlon’s divisions were in a new formation that was being used for the first time at Waterloo. Normally the Allied troops would enjoy the superiority in firepower that a long line of infantry gave against a narrow French column frontage. D’Erlon and his generals had decided however that for both Donzelot’s and Marcognet’s divisions that were going to break the allied line they would need to have a much longer frontage. So on 18th June these divisions were arranged in a formation called “colonne de division par bataillon” with a frontage of 140 men. This was different from a normal French formation of “colonne de bataillon par division” with a frontage of 70 men. This meant that Donzelot and Marcognet could bring twice the fire power to bear than normal and perhaps more than the Allied regiments weakened as a result of the fighting at Quatre Bras.

A little after 11 o’clock, Napoleon’s Aide General de la Bedoyere brought Napoleons’s instructions to General Comte D’Erlon. 1st Corps were to begin their attack at 1 o’clock in the afternoon in the direction of the centre of Wellington’s position at Mont St Jean. D’Erlon and Ney made their preparations. 2,000 men, half of the first division, were tasked with attacking and capturing the forward allied position at La Haie Sainte whilst the other half under Bourgeois and Quiot were to push for the crossroads.. The second division under Donzelot of 5,300 men was to attack and defeat Kempt’s brigade. The third division under Marcognet of 4,200 men would attack and aim to defeat Pack’s brigade. The fourth division under Durutte would divide in two. One brigade of 2,000 men would attack Best and Vincke’s troops to prevent them coming to Picton’s assistance. The other brigade would attack and isolate the other allied forward position in the farmsteads at Papelotte, La Haie and Smohain. Each division would be preceded by the usual French skirmishers, the tirraileurs, who would be able to shoot any allied officers attempting to rally their men.

What Napoleon did not realise was that he was directing this strong attack against the weakest part of the Allied sector which due to the casualties sustained at Quatre Bras only numbered 6,500 men

About one o’clock the Grand Battery of 80 guns including howitzers started shelling the Allied line where the attack would be made. The impact of this was not as great as Napoleon hoped due to the waterlogged soil. Instead of ricocheting many cannon balls simply became embedded in the mud. However some of the Allied artillery caissons were hit and the howitzers that fired over the top of the ridge caused casualties amongst the troops on the reverse slope. 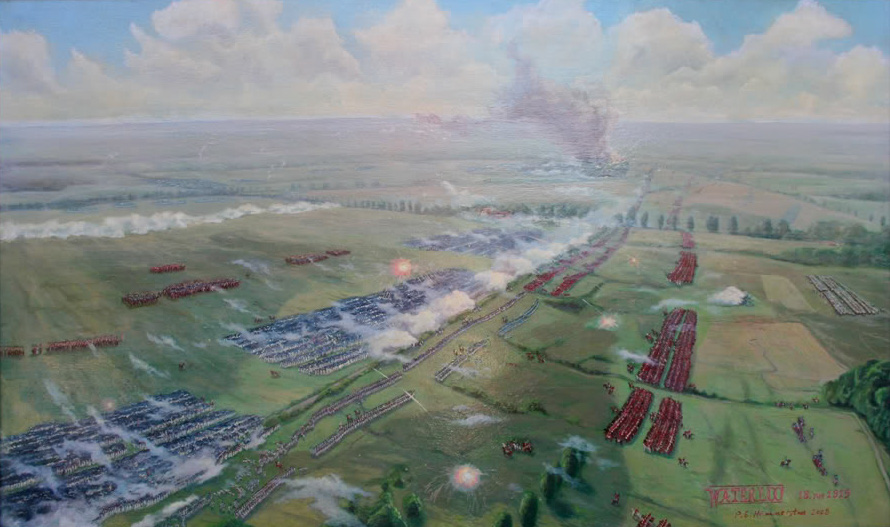 It was now 1.30pm D’Erlon began his attack by attacking La Haie Sainte. The farmhouse was surrounded, supporting troops were driven back and the supporting artillery destroyed. An attempt to reinforce the garrison met with disaster when the relieving troops were caught out in the open by cuirassiers and slaughtered. The cuirassiers also forced back the 95th Rifles. With the farmhouse surrounded and isolated D’Erlon could start feeding in his other divisions.

The 2,000 French troops of Quiot’s remaining brigade commanded by Bourgeois advanced forwards followed at 5 minute intervals by Donzelot’s division of 5,300 and then that of Marcognet (4,200). They descended the slope made their way through the Grand Battery, reformed, crossed the boggy part at the bottom of the valley and started to climb up the steep slope towards the Allies. It was now 1.55pm.

The ridge had a steep slope at the front which the French had to climb up. In front of the Allied position was a sunken lane the Chemin de Ohain. It was paved but on both sides of the road was a raised bank with a hedge on at least one of the two banks. To attack the Allied line the French troops had to get to the top of the ridge, get through a hedge, scramble down onto the sunken lane, clamber up the bank and get through a thorn hedge on the allied side. Such a situation would cause disorder to the best trained troops. In addition although the Allied artillery was small in number, it was positioned on the hedge line. Because of this the gunners could see the attacking French infantry and could shell them when they came into range. This they did first with solid shot, then grape and at a range of 50 yards or less with canister. Because the canister shell burst overhead, this proved particularly effective against densely packed columns of infantry and made up for the Allied forces having fewer guns at their disposal.

Because Picton’s men were lying down at least 100 yards behind the sunken lane the French reached the hedge unopposed. Some of the artillery men panicked and left their guns. It was now 2.15pm. The French crossed the hedge. The first troops they came up against were Graf van Bylandt’s Belgian-Dutch brigade. Bylandt was wounded and with most of his officers likewise wounded or dead the Belgian-Dutch broke completely on their right and fled leaving only a single Belgian battalion in the gap to face the largest French Division of Donzelot.

The British troops were ordered to advance. On reaching the hedge they were deployed not in the normal two-line formation but in four deep ranks. This was perhaps because their commanders feared an attack by cavalry and it was easier to move into square when in four lines. The downside was that they lost the overlapping fire that a two-line formation would give them. A firefight developed and the new French formation of Donzelot started to have an impact. General Picton attempted to regain the initiative by ordering Kempt’s brigade to charge with the bayonet but was shot and killed. The gap started to widen as the last companies of Kempt’s brigade, seeing the French advancing on their flank, turned towards their left. It was about 2.20pm. The two brigades of Marcognet’s division started to arrive. Marcognet’s men were opposed by Sir Denis Pack’s brigade three quarters of whom were Scottish Veterans but who had taken many casualties at Quatre Bras and were also in four deep lines. The Black Watch, who only numbered 330 men due to the casualties they had sustained two days before, were stopped and pushed back by the enemy’s fire. Pack shouted at his next battalion the 92nd or Gordon Highlanders “Ninety Second you must advance, everything has given way on your right and left and you must charge this column!” Pack wanted his men to attack with the bayonet as a better option of redressing the balance but the 92nd opted for a firefight instead with the French and came off worst. They too started to fall back from the hedge and the 45th Ligne went through the hedge. 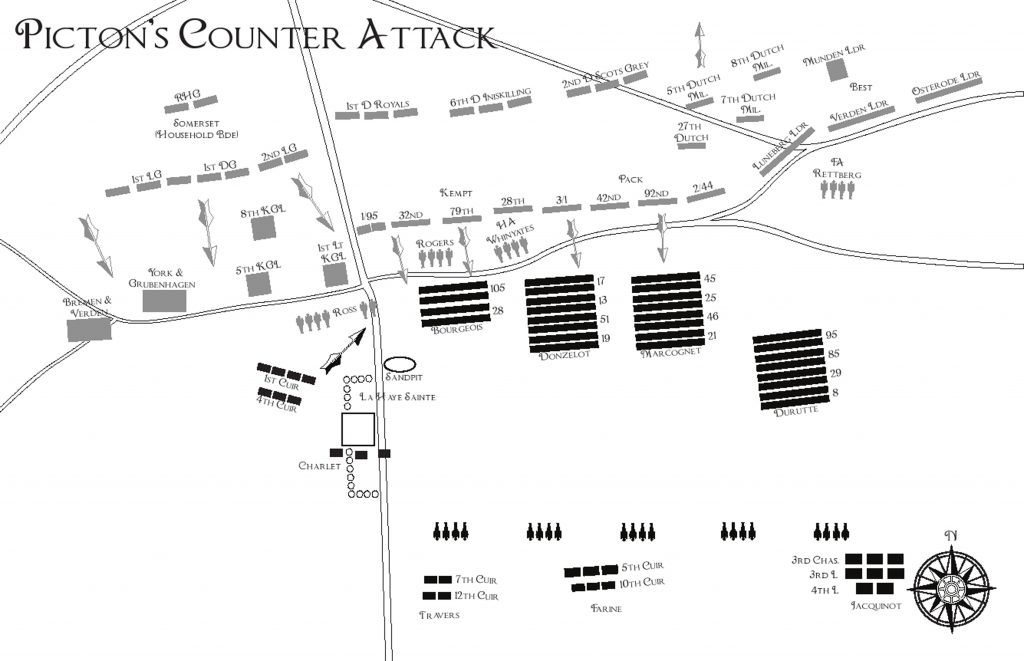 The Allied troops were starting to lose the fight. Casualties were mounting. More soldiers were helping their wounded friends to the rear as a means of saving themselves. Ammunition was running low. Wellington had not placed any reserves on this side of the battlefield and all it would take was for a few more men to break and then a battalion and there would then be a gap big enough for the French to surge through, turn the British flank and the French would have won the battle of Waterloo.

“They (some English battallions) were chased off with the bayonet, we continued the climb, crossed the hedge line that sheltered their guns; we were on the plateau, victory was ours!”

It was about 2.25pm and at that moment the Union Brigade led by Sir William Ponsonby charged.