Charge of the British Heavy Cavalry 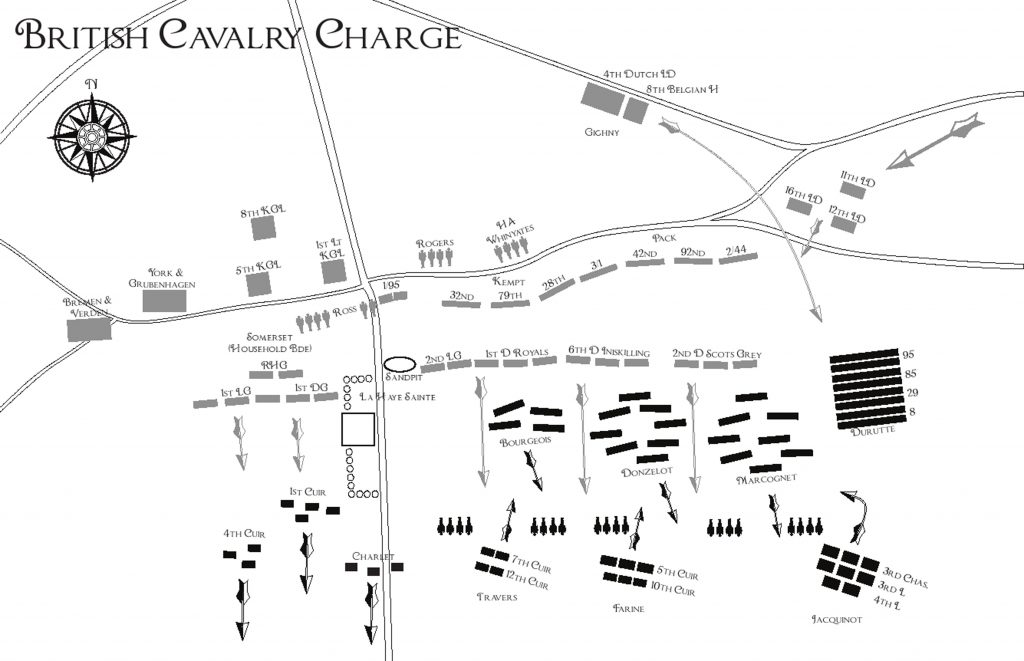 The Union Brigade comprised three regiments of British cavalry numbering no more than 1000 swords. The regiments were the First Dragoons (the “Royals”), the 2nd Dragoons (the Royal North British Dragoons or “Scots Greys”) and the 6th Dragoons (the “Inniskillings”). Only the Royals had recent battlefield experience having served in the Peninsular War, the Scots Greys and Inniskillings had last seen campaign service in 1794. The Brigade commander was Major General Sir William Ponsonby who was Wellington’s most experienced commander of heavy cavalry. The Brigade has been together for three weeks- the Royals joining the other two regiments on 27th May- and Sir William had done his best to train them up to the standard he expected.

The Union Brigade had skirmished with the pursuing French cavalry during the retreat the day before and had earned high praise from Lord Uxbridge. It was situated initially at the bottom of the reverse slope of the Mont St Jean ridge to the left of the crossroads made by the Charleroi: Brussels chaussee and the Braine L’Alleud : Ohain road. Sir William kept it there to minimise the impact from the howitzers of the Grand Battery. Lord Uxbridge the commander of all the Allied cavalry rode over to Sir William to explain that he and Lord Edward Somerset’s Household Cavalry Brigade would charge the French cavalry and infantry around La Haie Sainte whilst he expected Sir William to deal with the main French infantry attack.

Sir William ordered the brigade to be brought up to almost the crest of the hill but still out of sight of the French. The French did not know that there was cavalry perfectly positioned to attack them in the one area they had not considered, namely the front and so the Union Brigade’s attack would be a total surprise.

The number of the French was so great that he did not have the luxury of keeping one regiment in reserve; so, all three regiments had to be deployed carefully. He ordered the Royals, his most experienced regiment, to deploy against the immediate threat of Bourgeois’ troops, the Inniskillings were then to deploy against Donzelot and Marcognet and finally his least experienced regiment the Scots Greys against the remainder of Marcognet’s troops. It was to be an attack en echelon.

The first clash took place on the crest itself. The Royals had to ride up hill so the impact would not have been from a gallop but from the sheer surprise and the weight of the horses. The front regiments of Bourgeois’ brigade managed to get off a volley which brought down 20 of the Royals. Two squadrons attacked Borgeois’ brigade and the French fell back down the slope pushed by the cavalry whose charge was gaining momentum as they rode downwards. Captain Clark had been engaged in fighting the enemy for 5 or 6 minutes when he spotted the eagle of the 105th de la ligne and with his troops captured it.

Momentum was only gained once the cavalry crossed the sunken way, broke through the other hedge and started down the front slope. This is where the bulk of Donzelot’s and Margognet’s divisions were attacked.

The Inniskillings and the third squadron of the Royals struck Donzelot’s division. This was nearly three times the size of Bourgeois brigade but the French troops using their new formation had not practiced deploying into square to resist cavalry and were therefore particularly vulnerable. The same applied to Marcognet’s division. As Lieutenant Hamilton ADC to Sir William wrote

“We again charged – the General riding along the whole line to the left of the brigade – so that we saw the whole three regiments charge: the result in each instance the same – namely- the enemy throwing down their arms, and begging their lives.”

As Corporal Dickson of the Scots Greys wrote years afterwards:

“We at once began a furious onslaught on this obstacle and soon made an impression; the battalions seemed to open up for us to pass through and so it happened that in five minutes we had cut our way through as many thousands of Frenchmen. We had now reached the bottom of the slope”

It was 2.45pm. In a space of 20 minutes the Union brigade had destroyed five French infantry brigades inflicting 5,000 casualties . Thousands of prisoners (at least 2,000) had been taken and were being shepherded to the rear of the battlefield by the relieved British infantry who 15 minutes earlier must have thought themselves beaten. In addition, thousands had been wounded and killed. A second eagle, that of the 45th de la ligne had been captured by Sergeant Ewart of the Scots Greys. Napoleon’s masterstroke to secure victory had been defeated and as Uxbridge wrote “When I was returning to our position I met the Duke of Wellington, surrounded by all the Corps diplomatique militaire, who had from the high ground witnessed the whole affair. The plain appeared to be swept clean, and I never saw so joyous a group as was this Troupe doree. They thought the battle was over.”

Unfortunately, with blood up and all three regiments committed there was the very real possibility of things getting out of hand and the French making a counter attack. The inexperienced Lieutenant Colonel of the Scots Greys led 50 of his men to attack the French Grand Battery and was killed. It is important to discount the fiction that all the Scots Greys participated in Hamilton’s suicidal attack. They did not. Lieutenant Ingilby of the Royal Horse artillery stationed with Sir Hussey Vivian’s cavalry was in a perfect position to see what happened, he wrote:

“An inconsiderable party of Sir William Ponsonby’s brigade after this success, or in continuation of the charge, wheeled to their right and rode amongst the Guns of the right flank of the great French Battery, and kept undisturbed possession of them for a quarter of an hour or twenty minutes.” 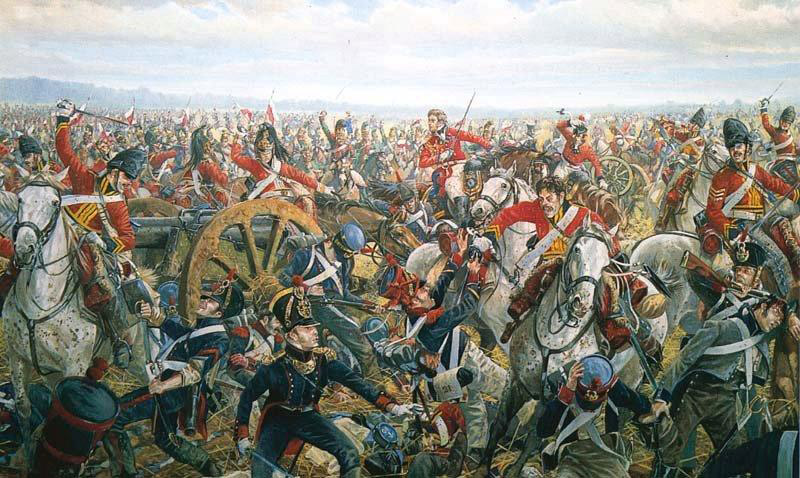 Sir William finding the remainder of the Scots Greys attacking the one French regiment (85th de la ligne) in square pulled them away but had to overcome the French chasseurs who had been protecting Durutte’s advance. In this melee they were struck by the 4th lancers of Colonel Bro. Sir William, possibly wounded surrendered and was then killed by Marechal de Logis Francois Orban to prevent him being rescued by some Scots Greys

Other units of French cavalry including cuirassiers and more lancers were deployed against the tired horsemen. Many of the Royals and some Inniskillings had already started to withdraw to safety but the Scots Greys were not so lucky. As Captain Chapuis of the 85th de la ligne noted

“everything that our fire spared was soon destroyed by a regiment of lancers and a regiment of chasseurs a cheval that were a short distance behind the 85th . Many Scots Greys owed their preservation to General Vandeleur’s light dragoons charging and repelling the lancers”

It is impossible to know the casualty figures sustained by the Union Brigade in its charge. Roll calls were made at the beginning of each day and the Union Brigade had to fight more during the day- the records of the Inniskillings record charging 5 more times during the day and sustaining casualties from French artillery when relocated to the right side of the Allied Sector But even if the casualty figures sustained on the 18th June of 49% were all due to the first charge it was a price well worth paying for the result it achieved.