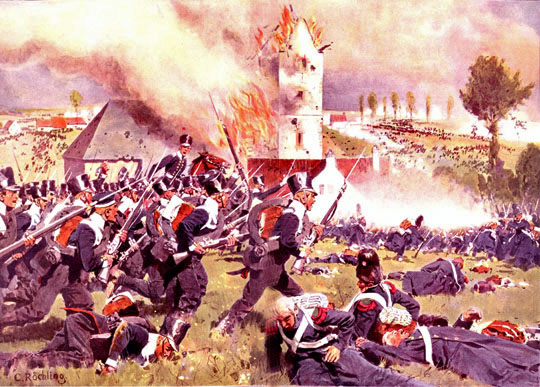 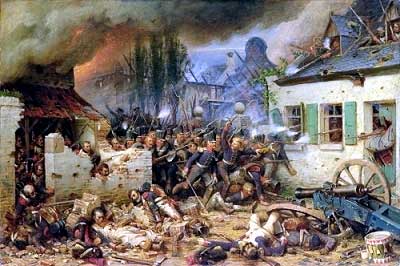 Napoleon could now see the troops attacking Plancenoit were indeed Bulow’s Corps , not Grouchy. Seeing that Lobau’s Corps on the ridge was under severe pressure and mindful that the loss of the village would spell disaster for his army, he ordered the entire Young Guard Division, commanded by Comte Duhesme to occupy it and hold it. He rushed his troops into ‘Attack columns’ and sent all eight battalions into the village. The village of Plancenoit would be fought for, to the death; here the Young Guard were determined to make a stand.

The Prussian artillery which announced the assault was heard, as intended, by Wellington. Hiller’s 16th Brigade formed line and the six battalions marched directly on Plancenoit, determined to oust the French defenders; with the 14th Brigade moving up in their rear to form a reserve. The Prussian assault was initially successful, pushing
the French defenders back, as far as the open space around the church which sat on a small hillock and was surrounded by a defensive wall. Here they met a furious resistance and the advance was halted. Bloody hand to hand fighting see-sawed through the village without either side truly gaining the upper hand, although the Prussians did capture some cannon and a few hundred prisoners.

Napoleon seems to have been forced to concentrate most of his personal efforts in commanding the fight against the Prussians at this time leaving Ney to continue to apply the pressure on Wellington’s forces.

A further assault was prepared, with the 14th Brigade leading and the reformed 16th coming up in reserve. This assault reached the churchyard again and succeeded in breaching the French defences where:

After intense street fighting, with little mercy being shown to the wounded by either side, the Young Guard were, in their turn, slowly evicted, forcing Lobau’s troops on the ridge to the north, to fall back slightly. Duhesme was shot in the head whilst urging his guardsmen on and unable to continue in command. He only remained on his horse with the help of a number of his officers. He was to die of his injuries at Genappe two days later.

At this moment, with Plancenoit almost fully in Prussian hands and with Pirch’s II Corps starting to arrive in support, Napoleon’s position looked very precarious indeed.

Whilst the main Prussian attack came to a moment of crisis, Ziethen’s I Corps was now also approaching the battlefield, but at quite a distance from Bulow. They marched to Ohain via Bourgeois, taking them much further to the north and delaying their arrival. However, the 1st Brigade of General Ziethen’s Corps had arrived at the valley of the Lasne brook by 5 p.m. where they remained awaiting the arrival of the 2nd Brigade.

Whilst this movement continued Lieutenant Colonel Reiche, General Ziethen’s Chief of Staff, rode onto the battlefield on Wellington’s left wing and here he met Muffling, who informed him how important it was that the Duke received early support. Reiche rode hurriedly back but could not find Ziethen and took the cavalry vanguard onto the battlefield at a canter. When only one thousand yards from the French, Ziethen’s men halted again whilst they sent forward scouts, who returned with the impression that Wellington’s army was close to defeat.
At this very moment Major von Scharnhorst of Blucher’s Staff brought an order for Ziethen’s Corps to move to their left and support Bulow’s battered forces around Plancenoit, which Ziethen felt honour bound to obey.
Muffling soon observed Ziethen’s movement and having ridden over to the Prussians to discuss the state of affairs, he persuaded the general to again march to support Wellington’s left rather than supporting his own countrymen.
The arrival of Ziethen’s troops on the left wing of his army, bolstered the weakened forces there and allowed Wellington to pull sorely needed, relatively fresh units, to bolster his severely weakened centre including Best’s and some of Vincke’s infantry and Vivian’s and Vandeleur’s light cavalry. However, it did lead to the unfortunate case of ‘friendly fire’ as the Prussian troops mistook the uniforms of the Nassau soldiers for French uniforms. When Saxe-Weimar rode swiftly over to General Ziethen to request that his men stopped firing on them, Ziethen replied sardonically:

My friend, it is not my fault that your men look like French!

Marshal Ney’s forces had only recently finally captured La Haye Sainte and he urgently requested more troops from the Emperor to exploit his success. Napoleon answered the message curtly, informing Ney that he had no troops to spare; but, ever the arch gambler, Napoleon threw the dice for one last time.

He would use the cream of his army, the Old and Middle Guard, who had stood in reserve all day, awaiting their opportunity to defeat Wellington, but first the Prussians needed to be quieted.

Two and a half battalions of the Old Guard which was all that could be spared were ordered to march directly upon Plancenoit to drive the Prussians back. The 1st Battalion 2nd Chasseurs led the charge with Major General Pelet leading them on, the 1st Battalion 2nd Grenadiers and two companies of the 2nd Battalion 1st Grenadiers following up in support. This small force, numbering no more than fifteen hundred men marched fearlessly into Plancenoit and with a great roar, pushed on through the village, mercilessly bayoneting everything in their path. Such an impetuous attack against horrendous odds should have been doomed to failure; but their fearsome reputation struck fear amongst the Prussians, and the sheer ferocity of their bayonet charges by platoon, supported by the remnants of the Young Guard, caused them to flee. They charged on through the now burning streets, recapturing the church again and driving the Prussians completely out of the village which was almost carpeted with the dead and dying of both nations.

The village was to remain in French hands for the next hour, during which Napoleon launched the remainder of his Imperial Guard against Wellington’s army in an attempt to snatch victory from the very jaws of defeat.

Rallying his men for another assault, Bulow’s troops were buoyed by the sight of fresh troops of their own, with the arrival of Pirch’s 5th Brigade commanded by Tipplskirch, which fortuitously arrived in time to supplement this next great attack.

With the Prussians now able to launch over thirty thousand infantry against less than fifteen thousand French defenders in and around Plancenoit, the eventual outcome was almost certain. Sheer weight of numbers finally overcame the French veterans and despite a stubborn resistance they were slowly forced back and for the final time the village was to change hands.

The French had no further reserves to commit against Plancenoit and the Prussians cautiously pressed on towards the Brussels highway, but were prevented from breaking through completely by the measured withdrawal, inch by inch, of the Chasseurs of the Guard.

The fight for Plancenoit had caused losses in the region of 6,000 men each.