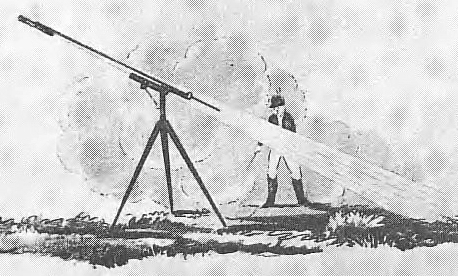 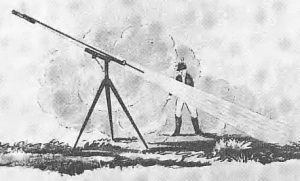 Rockets were supposedly invented by the Chinese about a thousand years ago. Shortly after the invention of gunpowder someone discovered that by stuffing a bamboo pole with the black powder and lighting one  end, the pole would zoom off in any and all directions. It boggles the mind to imagine the reaction of the Chinese  who first discovered this characteristic, before the pole to stabilise the rocket‘s flight had been invented!

Rockets for European warfare seem to have been introduced by Roger Bacon in the late 13th century: an  odd thing for a Franciscan monk to do.

Rockets were thereafter used as a weapon, but their unreliability made them a poor choice compared with  guns that were capable of being aimed with relative accuracy.

William Congreve was the eldest son of Lieutenant– General Sir William Congreve, Colonel Commandant of  the Royal Artillery and Comptroller of the Royal Laboratory at Woolwich and Superintendent of Military  Machines.

After passing through the Royal Academy at Woolwich, at the age of 19 young William was attached to his father‘s establishment: the Royal Laboratory at Woolwich.

William realised that the easy portability of rockets made them an attractive alternative to cannon when  operating in broken terrain, such as in the mountains of Spain and Portugal. Rockets can be fired from a light wooden trough, or even lying on suitably sloping ground, by a very small team of relatively unskilled men. There is no heavy barrel and limber to man-handle over rocky ground; and no meticulous loading drill to be followed:  vital when handling cannon if injury from unplanned explosions is to be avoided.

The disadvantage, of course, remained the tendency of rockets to veer off course; even to reverse direction  and dive back upon the team firing them. William believed he could improve the design of rockets so they would rival guns in terms of their accuracy, and surpass them in terms of their maneuverability, firing speed and ease of use.

By 1807 he designed his first rocket, and with his father‘s recommendations got it approved by the War  Office and the Board of Ordinance. Congreve rockets were used in the bombardment of Copenhagen in  September 1807, and were also tried by Lord Cochrane in 1809 in his attempt to destroy the French fleet  anchored in the Basque Roads.

The rockets were not very successful in the Basque Roads – certainly not as effective as Cochrane‘s own use fire and bomb ships. However their value in land warfare was perceived, and William was ordered to raise and equip two rocket companies in the Corps of Royal Artillery.

William came up with a series of designs, ranging from light 6 pounders, up to huge 8 inch diameter rockets, weighing as much as 3 hundredweights, and set on 24 foot poles.

The warheads varied. Some consisted of round shot: essentially a cannon ball with its own propulsion. Some  consisted of an explosive shell loaded with musket balls in the manner described by Colonel Henry Shrapnel.  There were also incendiary heads for attacking buildings and fortifications. And there were special rockets for  night use that fired a flare that floated down on a parachute, “to illuminate the atmosphere”.

In 1813 William was ordered into active service with one of his rocket companies, and served in the battle of  Leipzig in October 1813.  The rockets didn‘t do much actual damage to the enemy, but they had a major demoralising effect on the defenders of Paunsdorf, forcing them out of the village and back via Sellerhausen towards the city.  The Tsar showed his appreciation by appointing William a Knight of the Order of St Anne.

Rockets were also used successfully at Bayonne on the Franco-Spanish border, but Wellington was unimpressed. He had little regard for weapons that were still so inaccurate they occasionally turned on their own users, and he thought of them primarily as incendiaries. He is quoted as saying, “I do not wish to set fire to any town, and I do not know of any other use for rockets”, and before Quatre Bras ordered Whinyates , who led the Rocket Troop, to return his rockets to store and draw guns.

Told, “It will break poor Whinyates‘ heart to lose his rockets“, the Duke was adamant:

“Damn his heart, sir;  let my orders be obeyed”.

But the Duke relented and allowed Whinyates to keep his rockets. During the retreat from Quatre Bras one of  his rockets destroyed a French gun crew, but another chased Captain Mercer back towards Brussels! .

Nonetheless, at Waterloo Whinyates‘ rockets were used to great effect at a key point in the battle. After  glorious charge of the Union Brigade had run its course and turned sour, Whinyates‘ rockets helped to cover  their retreat as they were chased back by Napoleons Polish Lancers.

Gleig summed up the value of rockets:

“The confusion created in the ranks of the enemy beggars description. You see it coming yet you know not how avoid it. It skips and starts from place to place in a strange a manner that the chances are, when you a running to the right or left to get out of the way, that you run directly against it; and hence the absolute rout which a fire often or twelve rockets can create”.

Until the invention of real-time guidance system rockets continued to be a weapon of terror rather than accuracy.

Wellington: The Years of the Sword Elizabeth Longford

Weapons & Equipment of the Napoleonic Wars