The Waterloo Medal of Colour Serjeant John Gibson has recently come into my possession and it has been illuminating to research his life and times.  The papers at hand were his record of service, his marriage certificate and the obituary in the Kendal paper. He was born in Kendal on May 25th 1788 and was trained as an engineer but in 1809 at the age of 21 he joined the Militia as a substitute for a man by the name of James Mason who “had been drawn by the ballot”.  A reader may be able to explain this phrase which appeared in the obituary. In 1810 during the Burdett riots he was sent to Ireland. Rioting took place throughout the land following the announcement that the House of Commons had ordered the arrest, and imprisonment in the Tower, of Sir Francis Burdett MP. He was MP for Boroughbridge and a great campaigner for common suffrage who was not popular with the Government of the day.  He was arrested and taken to the Tower.

In  December 1812 John Gibson attested in Galway into the 33rd , stating his age as 22, so already there is a  two year discrepancy on his age. The 33rd had been in India for several years and only returned to Gravesend in July 1812 and were probably stationed in Hull at the time of Gibson’s arrival in the regiment. However after a mere 3 months he was promoted to Corporal and exactly a year after that he was promoted to Serjeant possibly as a result of his service at the Battle of Bergen Op Zoom.  In July 1813 a force under Sir Thomas Graham to fight the French embarked from Harwich for the Netherlands where after a good deal of to-ing and fro-ing the 33rd found themselves amongst 4000 British troops ordered to assault by night the strong fortress of Bergen op Zoom on 9th March 1814. It was not a success. The force was  forced to withdraw sustaining heavy casualties including the death of a Brigade Commander and 12 officers including the Commanding Officer of the 33rd being wounded. The 33rd’s losses were considerable; 2 serjeants and 26 rank and file were killed, 58 wounded and 56 taken prisoner.   John Gibson was one of those wounded but was promoted to Serjeant no doubt filling one of the vacancies: he later had a great deal to say about the privations of this campaign.

In June of 1815 events caused the 33rd to be in action once more and this time at the battle of Quatre Bras where it was a decidedly tricky time for the battalion. They lost some 100 men and officers and it was here that John Gibson was badly wounded in the head and fell “helplessly wounded by the roadside”.  The obituary goes on “here he lay for hours under the feet of the horses of the French Cavalry who were charging around him”. He was however rescued and sent with other wounded to Antwerp. Subsequently he took part in the march of 21 days to Paris where he received further promotion to Colour Serjeant. He returned with the regiment to Canterbury where it was apparent that there were few survivors of the campaign.  In 1822 he embarked with the 33rd from Cork to Jamaica, where he served for four years according to his record of service although the regiment remained until 1832 and returned in March of that year.  John Gibson took this opportunity to leave the King’s service and he was discharged on 11th April that year with a pension of 1 shilling and 8 pence per day.  It is interesting to note on his discharge papers that he gained an extra two years for being at Waterloo which for pensionable service was worth a great deal.  It is likely that Gibson returned to Ireland in 1826 to be employed outside the regiment as he married Ann Cochrane of Glasgow on 13th July 1826 in Boyle which is in County Roscommon.  The certificate of marriage, the original of which I have is signed by the John Macrea the “Chaplain to the Troops at Boyle”.  Interestingly his discharge papers are signed by John Cochrane “the Pay Sergeant of his Company”.  One wonders if he married a friend’s sister? At the time of discharge he was 42 years of age, 5 feet 5 ¾ inches. 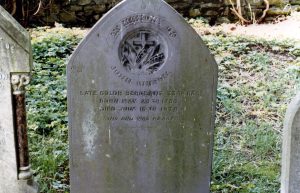 His later life he returned to Kendal where he became a warder in the Kendal House of Correction which he did for 18 years.  He died on 13th July 1878 which makes him 90, a remarkable age at that time. I am grateful to the Regimental Museum of the Duke of Wellington’s Regiment for the image of John Gibson which shows the Waterloo medal being proudly worn and it is interesting to see that the buckle by which he attached it to his coat has survived.  The issue ring did not survive but on the picture you can see that it is the same bar that is with the medal to day. His grave is in the Old Cemetery, Kendal and I am indebted to David and Janet Bromley for the image of John Gibson’s gravestone. The inscription reads” IN MEMORY OF JOHN GIBSON LATE COLOUR SERGEANT 33rd REGT. BORN May 25th 1788. DIED July 13th 1878. HIS END WAS PEACE”