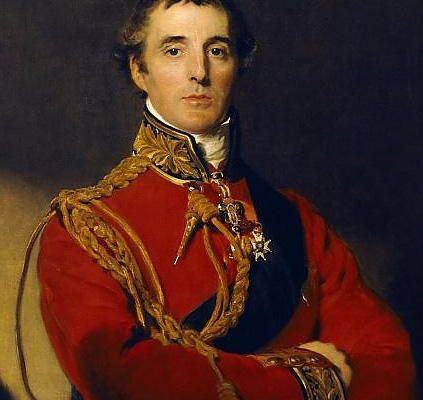 By the time the First Duke of Wellington died in 1852 at the age of eighty-three, he was the most famous man in Britain. One-and-a-half million people thronged the streets of London to watch his funeral cortège pass, and Queen Victoria, standing on the balcony of Buckingham Palace, wept unrestrainedly at the loss of the ‘greatest man this country ever produced’. How did one who had been, in his own words, ‘a dreamy, idle and shy lad’, withdrawn from Eton because he was not bright enough to justify the expense, become the most celebrated of all British Generals – his position on that pedestal still unassailed today?

Arthur Wesley [the family name reverted to Wellesley in 1798], was the fourth surviving child of Anglo-Irish nobility. Born in 1769, he spent his early years in Ireland where his father was Professor of Music at Trinity College, Dublin. His family moved to England when he was twelve; his father died shortly after.

There followed several inglorious attempts to educate Arthur, whose only talent appeared to be an aptitude for playing the violin. His formidable mother despaired of him: ‘I vow to God I don’t know what I shall do with my awkward son Arthur.’ Finally, he was sent to a military academy in Anjou. Within months of his return to England in 1786 he was gazetted an ensign. The seal was set.

Arthur’s first posting was in 1788 as ADC to the Viceroy in Ireland, where another duty awaited him: Trim was the family parliamentary seat and he was expected to take his turn after his two older brothers. Soon after arriving, Arthur had a goal of his own: Kitty Pakenham, a bookish beauty who was a favourite at the viceregal court. He wooed her assiduously, but when he asked for her hand, her brother, Lord Longford, summarily dismissed the proposal, considering him to be neither rich nor important enough.
This rejection was probably the final spur; failure of any kind was now anathema to him. He promised Kitty that his ‘mind would remain the same’ but soon after he burnt his violin and with it the last vestiges of a dilettante. These tumultuous personal events were happening against the backdrop of the French Revolution and the shock waves that followed it; they combined to form in him a strong distrust of change, an obsession with order.

In 1793 France declared war on Britain and a young Corsican called Napoleon Bonaparte was given his first command. The year after, in Flanders, Arthur Wesley, by now a Colonel, got his first real experience of battle, against the French. Six months later he was back in Ireland, having learnt ‘what one ought not to do’. He had observed inadequate supply lines, ill-equipped soldiers and out-of-touch officers more concerned about the quality of their meals than the conditions of their men. Later in his life, when asked about his success in campaigns, he replied, ‘I was always on the spot – I saw everything and did everything for myself.’ This hands-on approach was to prove one of his greatest strengths on the battlefield.

He was not home for long. In 1796 he sailed for India, where he was to spend nine formative years. Before leaving he resolved to educate himself and he took with him a substantial library which included Voltaire, Rousseau, Locke, Swift and Frederick the Great. Soon after his arrival in India his eldest brother was appointed Governor-General; whatever the advantages this seemed to promise, it created jealousies which saw Arthur superseded in a command. He minded this bitterly and it reinforced his lack of trust in others, including even his brothers. He never forgot his public duty, but hereafter it went with a private determination to ‘walk alone’.

But India also gave him, amongst a string of other victories, Assaye (1803), which he always cited as the ‘best’ battle he ever fought. And victory gave him confidence in his judgement. He realised that discipline on the battlefield was paramount and courage was valueless without it; as he remarked, ‘there is nothing so stupid as a gallant officer.’ The sub-continent may have been considered a military backwater, but it gave him skills that reached beyond the armoury of warfare: he learnt to respect the religion and traditions of the native peoples and to deal with the intricacies of diplomacy.

When Sir Arthur Wellesley (as he now was) returned from India in 1805, he was a national hero, and when he offered his hand to Kitty, this time it was accepted. He had honoured his promise but his bride was no longer the young girl he had left behind; indeed he ungallantly remarked to one of his brothers, ‘By Jove she has grown ugly!’ At any rate, she would never compete with his great love, the army. She had given him two sons by 1808, when he went to fulfil his destiny in the Peninsular War: ‘My die is cast, they [the French] may overwhelm me but I don’t think they will out-manoeuvre me….because I am not afraid of them as everyone else seems to be.’ Over the next six years all that he had learnt, briefly in Flanders and then in India, would be put to the test.

The War was not an unbroken trail of glory. There were setbacks and moments of despair: Wellesley was lambasted for signing the Convention of Cintra (1808), and morale was severely affected by the failure of the siege of Burgos (1812). But victory was the pattern: Salamanca (1812) showed him to be the master of manoeuvre and Vitoria (1813) remains one of the greatest strategic triumphs in British history. By 1814, the French had been driven from the Iberian Peninsula and Napoleon banished to Elba.

At the start of the war Sir Arthur had been the youngest Lieutenant General in the British army: by the end he was the Duke of Wellington and a Field Marshal, showered with titles, gifts, and military honours. His reputation extended far beyond the boundaries of battle; for his troops his mere presence on the field was electrifying: ‘we would rather see his long nose in a fight than a reinforcement of ten thousand men
any day.’

‘It is for you to save the world again.’ With these words Tsar Alexander of Russia set the stage for the greatest and last battle Wellington would fight. In the spring of 1815, Napoleon had escaped and stolen a march on the enemy but on the eve of Waterloo, the Duke displayed his customary coolness by being guest of honour at the Duchess of Richmond’s ball in Brussels: his psychological warfare required ‘pleasure as usual.’

At the Battle of Waterloo the ‘finger of providence’ was on Wellington. But he had other things on his side; he was a consummate defensive tactician and had perfected the timing of his offensive action. His supply lines were in place, he had reconnoitred the ground (and would use his ‘reverse slope’ tactic to brilliant effect) and he inspired total confidence in his men. Like their Commander, every man on the battlefield was ready to sacrifice himself. Typically, the chateau of Hougoumont suffered wave after wave of attack from the French, but was held for the entire day by guardsmen, one of whom would later be described by the Duke as, ‘the bravest man at Waterloo.’ When late on Sunday June 18, 1815 Wellington left the battlefield he was utterly exhausted. He wept as he was told of the terrible losses: fifty thousand lay dead or dying, ‘I hope to God I have fought my last battle.’ His wish was to be granted.

Wellington had finally faced and defeated the Emperor, who could claim superiority as a military commander, but had misguidedly underestimated the courage and energy of the ‘Sepoy General’ and the constancy of the Prussians; ‘this affair is nothing more serious than eating one’s breakfast.’ Napoleon would live to choke on these words as he spent his last six years a prisoner on St Helena.

Wellington returned to politics, evolving as one of the grandest of Tory grandees; he became Prime Minister in 1828 and held the office for nearly three years. He had many critics but his greatest political achievement was to steer Catholic emancipation through Parliament, his Irish roots giving him unique insights. If this was his high point, the low was the Reform Bill, to which his opposition was implacable. He paid the price when his London home, Apsley House, was stoned and he was pursued by a mob who tried to drag him from his horse. His composure unruffled, he enlisted the protection of, amongst others, two Chelsea Pensioners who were passing.

The Duke continued to the end to play an active role in public life. His bittersweet relationship with his wife Kitty ended with her death in 1831 but he was consoled by the company of many clever and beautiful women, who effectively replaced his battlefield entourage of dashing young men. He was devoted to both his daughters-in-law and derived immense pleasure from his grandchildren, with whom he was playing the day before he died.

As a direct descendant, it is impossible not to feel a certain pride of association. From an unpromising beginning, Wellington’s roll-call of achievements was extraordinary. By the time his coffin was lowered into the crypt at St Paul’s on a bleak day in November 1852 to lie alongside that other great Napoleonic hero, Nelson, he had truly earned the epithet, the ‘Great Duke’.