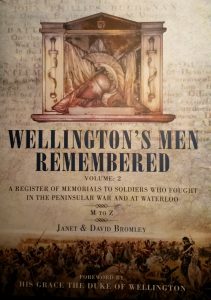 Published by Praetorian Press, an imprint of Pen and Sword

This is Volume two of an astonishing register of graves and memorials to those British and King’s German Legion men who fought with the great Duke from Portugal through Spain to Waterloo. Some 650 pages are devoted to the recording of these remnants of a bygone age.

The book is accompanied by a CD and both list in alphabetical order all the memorials of 3,150 men. Volume 2 takes us into the McGuires and the Mcdonalds, all spelt in a slightly different way, through to the last named man, William Yuill , a Colour Serjeant in the 1st Guards, whose monument (photographed) states that he “was killed by a grapeshot 7th April beloved by the Regt in which he served 20 years. A friend to truth he loved his King, zealous for his country and in its just cause he breathed his last. Adue my Friend”. This stone was recovered from a washing Fountain in a wood where the 1st Guards were encamped in 1814 and was removed to the cemetery in Biarritz in 1881.

This is but one pearl. The volume includes addendums from the first volume which covered names from A to L. For any serious researcher of Wellington’s men this is a valuable addition to your library and is highly recommended. David and Janet Bromley have made this one of their life works and the research goes on so let us hope there will be a third volume for all those graves and memorials they have since found and others that are still surfacing. Do you know of one not so far listed?