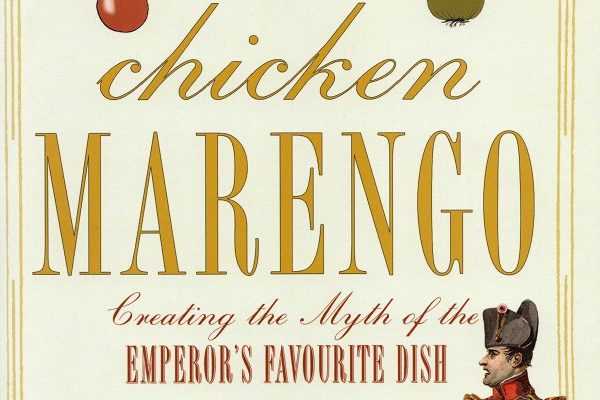 Creating the Myth of the Emperor’s Favourite Dish 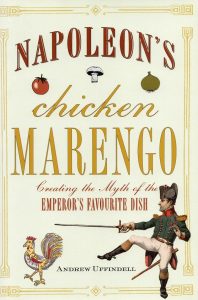 The name Marengo is associated with two things – a battle and a chicken dish that many of us will have tried at some time in our lives. Legend has it that it was first created for Napoleon on the evening of the victory from whatever Napoleon’s extremely resourceful chef, Dunant, could get his hands on. This fascinating book tells the story of Chicken Marengo, and examines the mythology that has grown around it. Here is a story of Napoleon’s eating habits, French cuisine and French military prowess interwoven to give us an unusual story, but one that is enlightening and also a very good read. I found this book hard to put down.

Andrew Uffindell examines all angles of the story, and comes to the conclusion that the association of the dish with Napoleon after the battle is a myth. Dunant was not even in Napoleon’s service at the time of the battle and so could not have created any dish for his master after this particular battle! Interwoven with the people is the story of the ingredients of Chicken Marengo, which have varied considerably over the last two hundred years. The author has done his culinary research, and comes to the conclusion that the classic ingredients of the dish were not available in the area of Marengo at the time it was supposedly created. He argues that the dish is part of a wider myth of the battle that began with some Napoleonic spin perpetrated by the Emperor a few years later. In the years following Marengo Napoleon rewrote the history of the campaign to place himself and his military abilities in a more favourable light, down playing the roles of Kellerman and Desaix, both of whom claimed to be instrumental in winning the battle, which very nearly came close to disaster.

The story is examined from all angles. The military history of the campaign, battle and men involved; the food items available in the area at the time that could have been used to create such a dish and how the battle was recorded and commemorated afterwards are all part of the varied and fascinating narrative. Napoleon’s eating habits and preferences are looked at, including how the myths and controversies that pervaded his life intensified during his final years on Saint Helena. This is a particularly interesting insight into the life of the Emperor.

The story ends with an overview of French cuisine around the world since the time of Napoleon, and how many different dishes have become linked to the man. Chicken Marengo may have been one such dish that originated after the Napoleonic Wars, given a Napoleonic epithet to commemorate the victories of the Emperor and so perpetuate the legend. Incidentally, Chicken Marengo has been made over the centuries from not only chicken, but rabbit and veal. For the cooks who might read this book, there is a recipe for the dish on the back cover.

Napoleon’s Chicken Marengo is a fascinating and very informative account of a battle, a culinary dish and Napoleon. The author has weaved these separate stories into one very readable narrative. It is a unique take on these stories and I would recommend this book to be in any library of books on Napoleon.