The Waterloo Association > Resources > Book Reviews > Inside The Regiment 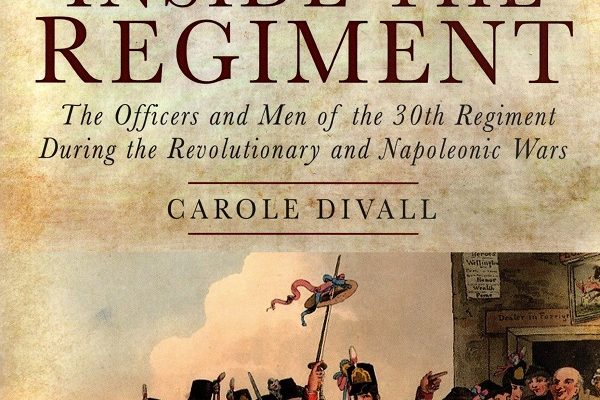 Histories of the period tell us what regiments fought in a particular campaign, the orders of battle, and general information such as strengths and casualty returns. This general overview of military history does not provide us with a personal view of the regiments involved. Inside the Regiment redresses that balance by taking us inside the 30th Foot and examining every aspect of regimental life. While Carole has performed very detailed in-depth research on this one regiment, the story she tells can apply to other infantry regiments in the British Army, so this is a serious book for the student of the British Army of the Napoleonic period.

Every aspect of the 30th Foot’s structure is examined using primary source material, letters and journals, presenting the wealth of data that has been amassed in a coherent and vivid narrative. The story begins with a look at how the regiment was organised and recruited with an analysis of the nationalities within its two battalions (plus the depot), the length of service of the men, their heights, and how the regiment appeared when inspected by senior officers. We learn who commanded each battalion and it is here that we are introduced what is unique for such a study: the personal angle. This book is very much about the men who served in all ranks of the regiment, with their lives, careers and fates used to illustrate the story of the regiment itself. Carole describes the lives of the officers both on and off duty and the experiences of the common soldiers in the ranks, using the stories of many individuals to make the account vivid and dramatic. By using such individual stories the author provides a personal account of the regiment, and makes this study one that would be of use to anyone researching their family history and who wants an account of what their soldier ancestor would have been doing within a British regiment.

Every aspect of the soldier’s lives is examined, from the barracks that were available (including their bedding and messing arrangements), the clothing and equipment, and food whilst on campaign. Punishments (and the misdemeanours that resulted in them), how soldiers left the regiment through death or desertion, the drill that turned them into disciplined soldiers, are all included in the story. One interesting fact that emerges was that reduction in rank was used as a punishment for NCOs who committed a crime (usually involving drink), but on occasion they regained their rank after a period of good conduct. It is little-known facts such as this that make Inside the Regiment a unique account of the inner workings of a regiment.

Inside the Regiment provides us with a fascinating insight into the British regimental system from a very detailed and personal angle. It will be of great interest to re-enactors and military and family historians. The narrative demonstrates how much detailed research Carole has performed to give us this story, and this book is certainly a unique take on the subject. I have found that since reading it for the purpose of this review, I dip into it frequently for information on barracks, food and discipline to name but a few examples of how Inside the Regiment can provide the information for other research projects. A very useful book to have inside your library.